Blushing in the Garden of Eden 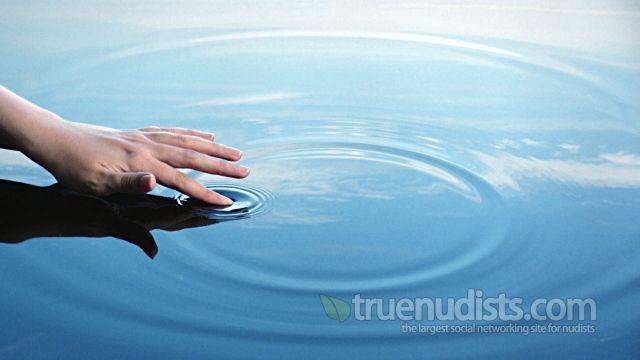 Blushing in the Garden of Eden

One of the fundamental truths of my life is that God has a very strange sense of humor and He has chosen me to be the brunt of the nudity jokes. Yes, me, the shyest kid in town, especially when it comes to seeing someone else naked, or (shudder!) someone else seeing me naked. To say that I was a teenage prude would be an understatement. I did not even believe in thinking about people being naked. People are naked under their clothes? Aaagh! But God plans things in mysterious ways, and he obviously had naked plans for me.

I dreaded the start of fifth grade, because in PE class you had to change into PE clothes and take showers when it was over. Not just any kind of private, in-your-own-bathroom kind of shower, but one big tiled room full of shower heads where you had to be naked in front of other boys. Other boys like fat Tiger Bates who taught me the facts of life with only a few major distortions mixed in. Other boys like Kevin Swello who had hair in places we didn’t even want to know about, let alone see. Coming of age and facing the world of locker rooms and shower rooms and boys’ PE was one of the hardest things for me.

Well, I made it through that part of my childhood by telling God all about it and being strengthened by Him. But then, He decided never to let me forget about it. College in the 70’s was wilder than my little-town morals could take. I avoided dorm drinking parties where party-goers sometimes played strip poker seriously with members of the opposite sex. When one of my two roommates decided to go streaking on his motorcycle, I avoided getting caught up in it in any way. Well, of course, everybody avoided that particular bit of stupidity, because it was snowing and the temperature was below zero. Ol’ Wild-man Beckham nearly froze off parts of himself that he could ill afford to lose to frostbite. There were a lot of things to avoid in college. Still I was exposed to the idea if not actually exposed without clothes.

I was always a very good artist, though, and as a raw talent I took Art classes even though I was an English Major. That led to the biggest blushing of my young life. Level 4 Drawing Class was drawing the human figure from life. I didn’t realize what that actually meant until halfway through the third week of that class. That is when the first nude model walked in to class. Dang! I was red in the face for the rest of the week. The mostly female class giggled behind their hands at me. The teacher, the illustrious department head, Dr. Louise Broffert, said things to us that just made it worse. “You know there is a difference between art and pornography,” she said, glaring at the few male members of the class. “It is mainly a matter of focus and point of view. I expect not to see any of the wrong point of view!” Oh, God! And pretty as that first model was, I was unfortunate enough to be sitting in a position where her innermost secrets were obvious and well-lit in front of me.

And it got worse. Students in Art 4 and above were asked to be the models! And it was an Art 4 class! Guys as well as girls were expected to take their turns. Besides, you made ten dollars per session for posing for your classmates. Oooh! The memory still makes me shiver. As well as it should. It was a Winter Quarter class. Fortunately, my turn coincided with a bout of the flu. I was infectious on my day and couldn’t attend. Even better, I got a note from student services suggesting I better not risk further exposure to the cold. God put me through several sleepless nights of the sweats over being expected to sit naked in front of art students, but in the end He made a way out for me. Of course, I ended up with a C in that class. The lowest course grades I got in college were both C’s that I got from Art classes.

God was not done teasing me about it yet. I learned while studying Shakespeare and the Elizabethans that there existed in their time a sect who called themselves the Adamites. They were named for the Garden of Eden and Adam in his natural state. The idiots tried to build for themselves a Utopian society, a popular thing at the time, and they walked around their little gated communities buck naked all the time. Well, I have to say, I got a good laugh out of reading about them, without ever realizing it was my doom to meet their modern-day counterparts. And I was fated to learn that they were not necessarily as wrong-headed as I thought they were.

As a young teacher in South Texas, teaching English to Spanish-speaking Junior High students, I took up with a pretty Latino Lady, lovely Isabella Daniels. She was divorced from one Gringo already, and not quite willing to commit to another. Hence, we never married. She was, however, a liberated lady living in a world after the Sexual Revolution and before the dampening effects of AIDS. She was not as shy about her naked charms as I was. My parents lived near Austin, so we often went for the weekend to the Austin area. I stayed with my folks, she stayed with her sister. The thing is, her sister lived in a clothing-optional apartment complex on Manor Road in Austin. It would be my first experience visiting naturists and nudists where they lived.

The apartment complex was built a lot like an English fortress from Elizabethan times. It was a huge rectangle with a central court yard cut off from view of all the surroundings. The first time I picked Isabella up there, I was put off by the iron bars on the gate. The entry portal was completely cut off from the world at large by locks. I had to ask the bearded gate guard to let Isabella know I was there. When he had spoken with her, he came back to get me and asked me to come in. He was naked! I had only seen his head in the barred gateway window. I didn’t get the full Monty until he ushered me inside. And there was no beauty in him at all. Hair everywhere, like ol’ Kevin with a beard. Except beauty can be more than just in the eye of the beholder. It is possible to find other sorts of naked beauty.

Inside I found a grassy courtyard with a swimming pool in the center. There was a pool table beside the swimming pool, under the shadowy canopy of the second story balcony. Around the pool table a number of portly men were playing pool and bickering with each other completely in the buff. As I waited, my eyes ended up fastened on two young ladies who wore t-shirts, but no pants at all. One of them noticed me looking and tugged at the front of her t-shirt as if to cover up. After that one little ineffective movement, however, they took no more notice of me, standing there all gawky and red in the face.

Isabella never let me live down the expression she saw on my face when she collected me that first time. She laughed roundly at my expense. She invited me to stay there too. I would have none of it. She had no shame about walking about in the all-together, but I was not trained to be that way. Except, I couldn’t really help but begin to feel the lure. From the times I had to visit her there I learned quite a bit about naturists.

They were not what I expected. They tend to be reasonable people in all other ways, bankers, lawyers, computer programmers, and Postal Service delivery persons. They just had this nutty habit of stripping nude and walking around like that. They don’t understand my reluctance and inhibitions any more than I understand them. But they are not bad and immoral people. The place was not a gawd-awful orgy site. It was a quiet conservative domicile where naked people lived. And I was more than a little impressed with the comfortable and thoughtful way they treated each other. And even how they treated me, an overly embarrassed hobbledehoy with body-image issues.

Mark Twain once said in the Diary of Adam and Eve that naked people have very little influence in society. This is generally true. The naturists don’t want that influence. They just want to be left alone. They will, however, proselytize. After Isabella and I broke up, I encountered naturists again when I took up stamp collecting. I found some stamp-collectors and traders in Florida that were also practicing naturists. Besides selling stamps by mail order, they ran a naturist park near Tampa and sold naturist publications of all kinds. They wanted me to come to Florida for my Summer Vacation from school, and they promised to gradually teach me to be a naturist. They wanted me to join the ANS (American Naturist Society, I think I am remembering that correctly) and I ended up buying a number of books from them and learning about their gentle philosophy of family naturism. Nudists, I discovered, are mostly married, have families, and are often quite fat, not exhibitionists in the least. Also, they are worldwide. There is a strong naturist movement in England where they even have a school; I think it’s like a high school, where all the students are nude. The FKK in Germany (Frei Korper Kultur) has most of the beaches on the North Sea draped with naked people. They must only play naked on the beach there, huh? The North Sea is definitely not warm enough for me!

So you can see, God has gotten a good laugh out of me and my reluctance to embrace the body He blessed me with. But never one to miss a chance to play one more naked joke on old Mickey, He now has me seriously planning to become a naturist and visit places like the naturist retreat in nearby Alvord, Texas. Now that I am old and fat and other people will probably shudder when they look at me, I am seriously considering finding out exactly what Adam and Eve knew in the Garden of Eden. And forgive me if I take it lightly and joke about it. After all, the joke has always been on me.

Please login to comment
Load 40 more..
* The views expressed in the article and in the following comments are of their respective authors and do not necessarily represent or reflect the views of this website's owners

Mastercard compliance and Media uploadsHas the pandemic directed you in nude ways?Wonderhussy does the Portland World Naked Bike RideWhat kind of nudist are you?Attending the FYN Spring Bash