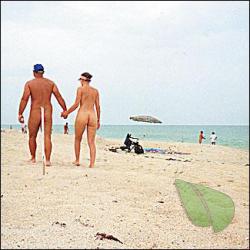 Some come because its a regular habit. Others come because they've heard about it. What have they heard? That Playalinda beach is one of Florida's few nude beaches. They heard correctly.Playalinda is located within the Cape Canaveral National Seashore and is a federally owned beach. Whether...

We visited this beach on 12-30-19 and again on 1-2-20 and had a great time both days. I spoke to a couple getting out of their vehicle in the parking lot #13 on my way to the beach. The guy had his back to me and I didn't want to appear to be staring at the woman so I didn't get a good look at either of them. After setting up on the beach, my wife went to the restroom and said the guy looked familiar. We were set up about 50 yards apart so I kept trying to get a good look at them without being considered a pervert. He went in the water at one time and I told my wife if it was not the same guy, it was ironic because this guy had strategically located jewelry just like the guy we know. I made up my mind that I was going to speak to him on my way to the restroom so as I got closer, I walked over and said "Good afternoon. You know they say that everyone has a twin somewhere and I want to tell you that I know a guy from Virginia that looks just like you." He smiled and said "That's funny. I know a guy that looks exactly like you from White Tail Resort." It was at this time that we both recognized each other. Then about 3 minutes later, another couple from WTR started walking down the ramp towards us. It was all unplanned but we were all in a happy shock. We moved our chairs and other items to get near them and remained in fellowship until 5:30. We packed up and went to a restaurant and had a great dinner.

Two days later, the first couple we met contacted us and told us they were going back on Thursday. We agreed to meet them and were shocked again when we arrived and a different couple from WTR had come and set up beside them. Once again, we set up with two couples whom we already knew and had a great day. The weather was better the second day as we had a lot more sunshine and the wind was not as strong.

This makes the third time we've visited Playalinda and we look forward to many more visits!

That is so great! Its a small naked world after all! A few years back we went to Club Orient on St. Marten and the second day we were there on the beach a guy stopped by us on the beach and asked me if I remembered him from high school. Looking at him slowly I said are you Dave?? He said yes I am and you are Beth! I turned a bit red as I have added a few pounds since then but being both naked I held out my hand and he helped me up to my feet and we gave each other a big hug and a peck on the lips kiss as we had dated a few times. We chatted a bit then he said he was going back to get his wife. They returned and we had a great afternoon with them.....again It's a small naked world after all! Beth (oYo)

Some come because its a regular habit. Others come because they've heard about it. What have they heard? That Playalinda beach is one of Florida's few nude beaches. They heard correctly.Playalinda is located within the Cape Canaveral National Seashore and is a federally owned beach. Whether by word of mouth or force of habit, this remote stretch of beach is well known as a nude beach.

For those without a GPS:From I-95 take exit 220 for FL-406 toward Titusvilla/Historic District, Turn left onto Garden StContinue onto A. Max Brewer Memorial Pkwy, Continue onto State Hwy 402, you will have to stop at the guard house to pay the park fee, light left toward PLAYALINDA Beach Rd, Drive to the end of the road, Parking Lot 13 Destination will be on the right. From Cocoa Beach, take Highway A1A north to State Road 528 and go west to State Road 3 and follow it north to State Road 402, then turn east (right) and proceed to the beach.