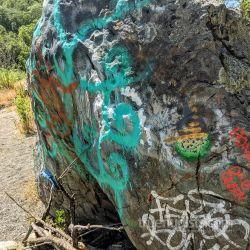 I would describe myself as easy-living, compassionate, and energetic. My focus is on joy and personal connection -- to others and to the Earth. It doesn't take much to keep me content. For those reasons, and because of where I reside, I label myself a "hippie."

I live in a small town in northern California, in a co-operative/group housing arrangement, and earn my living through a few different means, including teaching, logistical assistance with workshops, and pick-up work at a couple local shops. I'm a CMT, also, and earn a bit that way.

I have a presence in this community because I am quite passionate about enjoying social nudity -- to the extent that I will definitely go out of my way to make sure my lifestyle includes a multitude of options for it. I first discovered the nude beach culture of northern California when I was 19, and I've loved it ever since. I don't actually call myself "a nudist," however, because I don't revolve my whole life around an insistence on being naked all the time. I look at it, instead, as something fun and natural to incorporate into my overall lifestyle. Most of the people who I call my friends are the same way, too, so it's not like it is something which I do as a separate activity, in a specialized way, only on certain occasions. The way my lifestyle works, just about any sunny, warm day spent outdoors at a swimming hole, hot spring, or beach, almost automatically means getting naked.

Loving nudity and sex doesn't mean that I am into being lewd or invasive about it. I don't have random sexual encounters with strangers, out in the open. I'm not a swinger and I am most definitely not out to objectify or pursue sex, constantly. And I am very definitely not open to anything, any time, with anyone. I'm merely honest in believing that people can be free to include their sexuality in the enjoyment of being nude with one-another. That this can be an honest and natural way of sharing and connecting with friends. To me, this means living in balance -- neither rushing toward, nor pushing against sex. It is a position of neutrality, in which I remain joyfully open to possibilities and don't live in denial about what's going-on inside of me.

I think that the most vociferous of "non-sexual nudity" proponents completely miss the entire point. They see the world in terms of needing to wholly dis-identify with a world that packages-up sexuality as a commodity to be consumed. In some ways I agree with that mentality, but I don't agree that it has to mean contorting oneself into believing that they don't find nudity to be sexually-appealing in any way, shape, or form. That's simply not human. There is simply no way to deny it: nudity IS sexual -- that's just the way we are wired and there is no way around it.

Anyway, that's who I am, take it or leave it.

Anyone at all who is open, honest, compassionate, kind, and focused on joyful living in all aspects of their life, rather than driven by a need to chase after so-called "happiness." I prefer company with folks who have an holistic approach to their lives, and incorporate nudity as something that is natural and fun, rather than taking it "seriously" as a matter of doctrinaire life-philosophy. Although I'm never quite sure about the correct nomenclature, I think that makes me more of a "naturist" than a "true nudist."...A note about my policy on adding friends... I rarely add friends from out of nowhere, and don't see the point if I have no mutual interests and/or we aren't even from the same continent. I have very little in-common with those who are primarily self-labeled "home nudists." I am mostly interested in conversation and interaction with folks who are nude beach and/or clothing-optional hot springs type enthusiasts. From this point on I won't friend anyone who doesn't have a photo up, and with rare exceptions, require at least one photo to be a frontal nude. I won't add any couples that don't have at least one photo of the two of you completely nude together. I understand if you don't want to have nudes in your public profile (I don't, myself). Just say so in your friend request, please.**Since it has become necessary due to several unfortunate interactions, I'm going to say here that I am 100% not interested in anyone calling themselves a "family" nudist. This isn't to say that I am against families practicing openness toward nudity, because I am not at all -- I think it's a great idea, honestly. It's just that my experience here is that every single time, without fail, that I've had communications with anyone proclaiming themselves a "family" nudist, they've tried to steer the conversation into very uncomfortable territory.