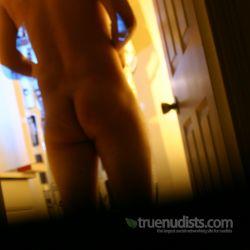 I have started and cancelled accounts on this site about 3 times now, for various reasons. My apologies to any contacts I may have disappeared on. I'll flesh this profile out as time allows.

Really anyone genuine. I like the idea of meeting older couples, but that may just be because it was an older couple that introduced me to social nudism.While I'd like to be a more social nudist, I'm also not especially social. The thought of just sitting around together in our collective nudity doesn't exactly thrill me (unless the conversation is particularly good.) I'd love to meet someone in my area with a private garden I could help out in or someone who could use an extra pair of hands in houshold projects I could learn something from. I'd also be interested to meet people who work on cars, motorcycles, or do woodwork. I like art and artists and I'd be open to modeling for life drawing or painting. Also, it might be nice to have someone with experience in fitness as a workout partner.Basically people who do stuff, make stuff, and think stuff.

Anything that can get me outdoors naked. Art and music. The occult and esoteric (woo-woo stuff.) Language and word origins. Building electronic devices (mostly for music/sound design.) Tattoos.

The American Astronaut, Thelma and Louise, Amadeus, Susperia (both of them). Directors David Lynch, Alejandro Jodorowski, the Brothers Quay, Guy Madden, and Kenneth Anger. Horror movies (if you couldn't guess by my screen name.) I like good ones and bad ones, with a special soft spot for the Euro-Sleaze of Jesus Franco.