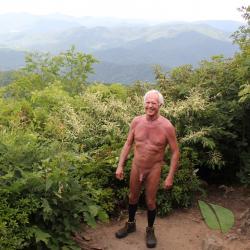 I'm HIV negative as of 7/7/21 (I assume everyone else is positive, which is totally fine) and any age range is just a suggestion :-) Was married in my previous life and have now been out now for 30+ years, have a married son and 2 granddaughters so I understand and appreciate biological family as well as chosen family. After practicing law for 33 years I closed my office and went to work for Equality NC, the statewide LGBTQ advocacy organization, for 5 years. I was the political and community organizer, thus I'm out and politically active. I returned home to mediate and arbitrate matters for folks who want to try to avoid a court hearing, but have now retired. As for me, I was born a gay male. That doesn't mean I have to fit into any specific group or stereotype. If you had a picture of me and it was cut up into a jig-saw puzzle; and every piece had a word that described something about me; the piece that said GAY would be no larger or more significant than any other piece of the puzzle....BUT...until you put that piece in place the picture would not be complete. We are all more alike than we are different.

I happen to be saddened when in locker rooms and men are behaving like shamed and embarrassed turtles. Yes. Locker rooms are safe zones for men to be men. This is a space for complete nudity. It seems to me there needs to be a class to remind the gen x, this is how to conduct yourself in a spa and locker room. Nude is truly a tool to break down barriers and allow your true self to come forward without being judged or minimised. It allows you to bond in ways which are impossible while textile.

Gang showers and open urinals are becoming a thing of the past because men are being raised to be ashamed of their bodies and are embarrassed for other men to see their penises. Body image awareness needs to become a movement so these men realise they are as beautiful as the next. Yes, some men are taller, shorter, 6 pack, hung, lean, muscular, pudgy, fat, young, old, glasses, grey hair, bald...all types. But we can all shower together and sauna together and be brothers who inherently understand each other because we are men who all want to be understood, appreciated, and nurtured. If men can't handle other men seeing their penis, how will they ever have sex. I refuse to use stall showers. I refuse to wear anything in a sauna. I refuse to wear anything in a spa. Yes I carry my towel and sit on it in the sauna and steam. Yes, there was a time when I was slightly more covered than I am now. But with friends and the inner desire for freedom, I got rid of the towel except to sit on. We need to gently persuade other guys that pissing together and showering together isn't gay. It doesn't challenge sexuality. But what it does do is point out the obvious; We are men in need of being masculine and free of being judged by other dudes and we can do this when we are nude in a locker room, with our buddies in the garage or our man caves..or while hunting, fishing, camping, hiking ......

Folks who love being naked, and outdoors is just all that much better. In warm weather I try and hike naked 1 or 2 days a week, sometimes 3.

LGBT Equality, politics, most anything one can do naked but especially social events and naked hiking.

Comedies, biographies, historical drama - not in to sci fi or horror - some action flicks are OK

Armed services members, folks who fight for the little guy and work for equal rights, religious folks who do NOT try and force their beliefs on others - if your religion says something is wrong, that means you are not to do it - it does NOT mean you have the right to force that belief on others