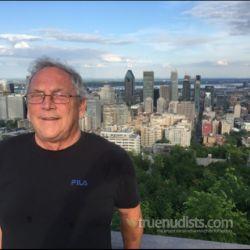 I did not realize I was a nudist until I was in my 30's but previously in my youth spent summers at my grandfather's farm in Pennsylvania where skinny dipping was a way of life mid-day for everyone to cool off and it was gender neutral and age neutral in a mud-bottomed pond. Also, on family camping trips skinny dipping was a way of life in secluded areas. I thought this was common practice. As an adult, I have always gardened and sailed naked when out of public sight, which I guess makes me nudist. Now that I am a mature adult, I have visited multiple nude beaches, skin and scuba dived, camped, and visited several nudist retreats internationally as well as in California, Virginia, Massachusetts, North Carolina, and Florida.

Other nudists, especially those that like to sail on sailboats (not yachts), gardeners, or those who just like to be naked

Sailors, soldiers, airman, and marines who have defended this country for the last several centuries