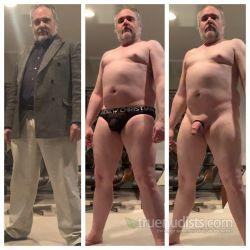 Regarding my interest in nudity? Always. We had Playboys around the house, and from a very, VERY early age, they triggered erections and those felt great. So, there was no way I could not associate nudity with pleasure. It didnt take much advanced reasoning to identify what was different about Playboy and why it got different results: the people in it were naked. Thus, I associated anyone being naked, including myself, with something positive. Clothes of course were a default state, but my thought then and now when wearing them is that a special and powerful state is possible by removing them. It can still distract me from almost anything. In some ways I personally dislike the attitudes at camps and colonies because, in their effort to make it safe, they take some of the fun out of it.

The moment I was alone, I would strip. Still do. I was fascinated with a Superman comic where he was shot by some kind of alien weapon and people thought he was dead because only his costume came fluttering to Earth.

Psychotics often manifest a sense of delusional self-importance by having mental breaks and disrobing. They consider themselves beyond limits. Yes, theyre mad. But I get a little of the reasoning. Naked, I feel more confident and more myself. Not because its natural, but because it has an almost occult, evocative power to intrinsically acknowledge the erotic energy we have along with all of our other qualities. Clothed, we can call upon all dimensions but one of our personalities to solve problems and represent ourselves. Nudity is the state that allows us to include one more dimension and exclude nothing. How we are taken by others? Thats another matter. That, in some ways, is up to them. But the inner power of nudity is something Ive always felt, and I feel it more and more as I age.