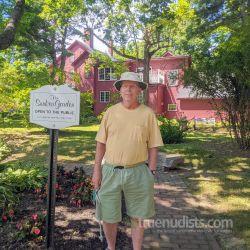 First time I was naked among a group of people was when my parents sent me to the local YMCA to learn how to swim. All of us in that class were naked as were the swimming instructors, most of whom were probably in their teens or early twenties. I never learned how to swim, and I would like to blame my inability to swim on the fact that the instructors were naked, and I could not keep my eyes off of them. The fact of the matter is that I am afraid of water above my knees. But sitting on the sidelines at the Y pool gave me a chance to take in the beauty of the male body. In high school showers were required after each Phys. Ed. class; the showers were gang showers. I do not think we ever thought about them; we just took a shower. The nice part was that I went to a combined junior/senior high school. I remember in seventh grade our PE class followed one with twelfth graders. We (at least I did) had the pleasure of seeing young naked late teens.

Also remember that as a child I was fascinated by biblical pictures of half-naked men and photographs of classical male sculptures in the encyclopedia at home. I did not realize until later that my curiosity in male nudity in those early years might have had a bearing or influence on at least my present-day interest in male nudity and possibly emphasized my homosexuality. I am sure Freud or Kinsey would have some comments on those influences.

Fortunately for me, some of the members today, regardless of their age, at my gym walk around naked; the sauna is also about 75% nude, with both adults and students.

I am partial to men who are (1) circumcised and (2) have hairy chests. Manscaping is not for me.

Would like to meet some men within a reasonable traveling distance who also enjoy nudity to share some of my interests as well as theirs.

Willing to chat or cam with men on this site. If you are not interested or willing to say more than "Hey, how's it hanging" or something similar, then you should chat with someone else. By agreeing to participate voluntarily or at the request of one or more other parties in a video chat or video cam, whether via a service provided by True Nudists or using a proprietary application between electronic devices, is not a consent for those parties to record my oral or visual participation without my written consent.

WARNING PRIVACY NOTICE: Any institutions or individuals, including members of True Nudists or their associates, using this site or any of its associated sites for studies or projects must note that:

You DO NOT have my permission to use any of my profile content, including photographs, in any form or forum both current and future. If you have done so in the past, currently doing so, or consider doing so in the future, it will be considered a serious violation of my privacy and will be subject to legal ramifications. The United States copyright law and associated international copyright laws apply to the use of my photographs and any text or other created material that is included in my profile. All of my content is copyrighted by me.

To Repeat: By agreeing to participate voluntarily or at the request of one or more other parties in a video chat or video cam, whether via a service provided by True Nudists or using a proprietary application between electronic devices, is not a consent for those parties to record my oral or visual participation without my written consent.

Barack Obama and would have loved to have met Ruth Bader Ginsburg.

Odd ball, but here I go. Enjoy collecting Windsor chairs made in the colonial and early Republic period, ca. 1770-1800, and predominately made in New England. Also have a very nice collection of early (late 1600s-late 1700s/very early 1800s) domestic lighting devices. Fuel was either cooking grease or fat and sometimes candles, but they were expensive, so oil-soaked dried rush or wicks were lit. Devices made of wrought iron, steel-rolled tin, or wood (real survivors because they often were used in a fireplace or stove when no longer needed or used for lighting).Also like most ethnic cuisines, reading, visiting art museums or galleries, keeping up with current events, and similar activities. Not interested in participating in or viewing athletic events. Don't have a TV.

Probably not many people heard of or ever saw the 1981 epic film "Reds" about the Russian Revolution. Co-written, produced, and directed by Warren Beatty. Starred Beatty (John "Jack" Reed) and Diane Keaton (Louise Bryant). Was 4 hours long and had an intermission after about 2 hours.