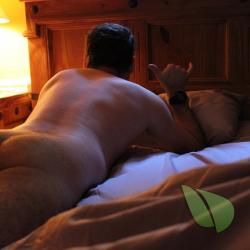 FastFive: Possessor of the "dad-bod"!

1) How long have I been a nudist? - A very long time.
2) How did I get started in nudism? - I took off my clothes.
3) Where do I practice nudism? - I'm very good at taking off my clothes, I don't need to practice.
4) Is your wife a nudist? - My wife is many things, chiefly a badass... but unfortunately she is not a nudist and has no interest whatsoever in the lifestyle, despite my best attempts to get her to think about it.

(NOTE: You will not find a face pic in my profile. If you want to see who I am just stop by the chat and you may find me on cam. I do not put pictures of myself online here, nor anywhere else... that's just how it is.)

My Thoughts on Nudism:

What's not to love about being naked? It's free, it's natural, and it's comfortable. What more could you want?

There are some people that suggest that there are "standards", or "quotas" to be considered a nudist... "you must be naked x hours per day", or "you have to do activity x naked" otherwise you can't be considered a nudist. Whatever! I think these people are just judgmental, and probably unhappy in life. I don't care if you live your life naked every day, or simply strip down just once a year on a secluded beach vacation... it's a state of mind. Be naked, be happy.

What doesn't make you a nudist is using the word "nude" as an adjective in every sentence you type. Nobody cares about your "nude coffee", or your "nude greetings", or anything else like that.

Personally, I just enjoy being naked (when I can) more than being clothed. I don't "hate" clothes, I just think that they are basically tools - like a hammer, or a shovel - you use them when you need them and put them down when you don't. (I live in Canada, so I need clothes more often than not.)

Being naked at home is nice and all, but being naked in nature is the best! The warm sun, a fresh breeze, cool water... it's all awesome. It just feels like it "should" feel. (And if you can't enjoy it in a natural setting, even just a quick skinny-dip in the backyard pool is fantastic.)

A Note on Friend Requests:
I'll generally only accept friend requests for two reasons:
1) We've previously chatted and/or shared a laugh in the chatroom (or in a Group or the forums here at TN).
2) We clearly share interests based on what I've written in my profile (below) and what I can see in yours.

Leave a message with your friend request stating why you're adding me.

If you're a total stranger and I see no clear reason to accept, I won't. C'est la vie.

Just looking to click with some people that I can get along with... fun people to converse with and share a laugh in the chatroom. I can get along with almost anyone that can carry on an intelligent, thoughtful conversation. Whatever, it's all good.

Any outdoor activity is better than sitting at home or in an office. Time spent with my dog is the best ever. Summer sees me cycling every day I can...100-150+kms / week at the very least. Hiking is almost as good, just a slower pace and lower heart-rate.Getting out to explore backroads and forestry trails in my truck is another great way to spend a Saturday!I also like putting some effort into my photography... not just randomly snapping crappy pics, but paying attention to what I'm actually shooting, composition, lighting, etc. I don't get to shoot as much as I'd like, but I've gotten better with time.Indoor hobbies... I'll pretty much be reading a book (paper, not electronic), occasionally gaming, or keeping up with a few TV shows (though that list gets shorter and shorter every year.) I also build scale models... yes, I'm that much of a geek!

Star Wars wins, always... the F&F franchise and the Marvel cinematic universe are tied for a very close second. Sci-fi and action are the movie genres for which I'll actually spend the exorbitant movie theater prices to see on a big screen.On TV, Firefly is, was, and always will be... the greatest TV show of all time. Great sci-fi never goes out of style.Currently I think The Expanse is (er... "was") brilliant - and the books are even better! Also loving Yellowstone, The Americans, and Deutschland 83/86/89.I watch a lot of Discovery Channel, Science Channel, and NatGeo as well. (See what I said earlier about being a geek? Yeah!)

I generally like anyone with actual talent... but I can't stand overly produced & commercialized trash. I listen to a relatively broad range of everything... like Depeche Mode, NIN, Weezer, Matthew Good, Prodigy, Chemical Brothers, The Crystal Method, The Glitch Mob, Phantogram, etc. (Can you tell I was a child of the 80s and a teen of the 90s?)On the other hand, Sirius XM's "40's Junction" on my satellite radio is equally brilliant: Glen Miller, Artie Shaw, the Dorsey Brothers, Buddy Rich. That was some genius music. (Sometimes I think I was born out of time.)

The X-Men! (No, I'm serious... bear with me a second... the X-Men were hated & feared by "normal" humans, yet they still fought to protect these humans because they did what was right.)Stan Lee once said "Lets lay it right on the line. Bigotry and racism are among the deadliest social ills plaguing the world today. It's totally irrational, patently insane to condemn an entire race, to despise an entire nation, to vilify an entire religion. Sooner or later, we must learn to judge each other on our own merits. Sooner or later, if a man is ever to be worthy of his destiny, we must fill our hearts with tolerance."Can't get any better than that.