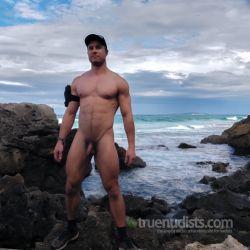 I had quite an unusual journey to nudism. As a kid I was always really self conscious about my body and didn't like people seeing me naked. One time as a teenager I was on holiday with my family. We were at a beach, and unexpectedly my parents decided to go naked. Let's just say I wasn't impressed. I'd been too indoctrinated into the mainstream view that nudity is either shameful or sexual.

In a strange way though, I think that repression also created a curiosity. So at age 19 when I moved into a house with my boyfriend, who would later become my husband, I took the opportunity to just go about my day naked at home. At first it was strange, but eventually I came to prefer being that way.

I was still shy about other people seeing me naked though. It wasn't until I was 27 that things started to change there. Our dog had died, and my husband and I were super depressed. We decided to get out and try doing some stuff that we didn't really do, including bike riding and swimming. We started riding our bikes to the beach for a swim every weekend. Afterwards we'd have to go shower and change to ride back. The showers at the surf club were communal, with an open changing area. It was really the first time I'd been in a situation where guys were just being naked around each other and it was no big deal. It gave me this sense of camaraderie and acceptance.

Two years later, we had our first nude beach experience on a camping trip. It had become kind of a bucket list item, and we saw that there was a nude beach in the town we were staying, so we decided to give it a go. We ended up going back there every day and discovered the joys of naked frisbee.

Unfortunately, for reasons I won't go into here, a few months later our relationship went downhill. We tried unsuccessfully to patch things up, before things fell apart completely. It was a nasty separation at first, and it was only because of the support of my parents and brother and sister that I'm still alive today.

A week later, there was a day of beautiful weather, and I decided I was going to go climb a mountain, and I was going to do it naked. I arrived nice and early. There were no other cars in the carpark, so I stripped off and away I went. It was a real turning point for me.

Since then I've done several other naked hikes, and take the opportunity whenever the weather's nice and I'm not working to go to the beach. Getting naked outside has been wonderfully theraputic. I love to play around in the waves and feel the power of the ocean. The beach I go to isn't a nude beach, but it's an isolated, usually deserted beach. I occasionally see other people there, and I don't cover up. So far I haven't been arrested, lol. I'm always looking for those rugged, out of the way places to explore naked. The sorts of places that aren't listed on nudist websites as official nude places, but the sorts of places you can get away with it because very few people go there.

Anyone who loves the great outdoors and wants to establish genuine friendships. Would especially like to meet local people or people visiting my town, or other people in WA who I might catch up with on my travels.

An eclectic mix of stuff, but my favourite bands are Pink Floyd, MGMT, Vampire Weekend, Cigarettes After Sex, Metallica and The Tea Party.

My parents are pretty awesome.