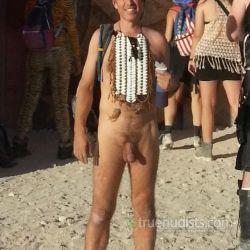 Began with private nudism around mid-1990's and then publicly in 2002. Joined the Southern California Naturist Association (SCNA) in Los Angeles in 2017 and AANR in 2021. Go to Black's Beach frequently (since 2005) and have done the World Naked Bike Ride (WNBR) in LA twice (2012, 2018). Also was nude every day from sun up to sun down (too cold at night!) at Burning Man in 2015. Went discreetly nude at a Joshua Tree campsite with understanding campmates (whom I'd just met) for Thanksgiving week in 2017. Have also been to Pirate's Cove (San Luis Obispo), Deep Creek Hot Springs, the old Salomon Bay Beach in St. John's, USVI, and in March 2022 Playa Zipolite, Oaxaca, Mexico. Used to attend Nude Art LA every six months or so before pandemic, and I did in-person coed nude yoga classes at least twice a month since late-2015. Now, my ongoing yoga classes are online and are multiple times a week. Go to Black's Beach, my favorite place, as often as I can.

I'm straight, originally from the Midwest of the U.S., and graduated from one of those smart universities. Have been a life model a few times way back when, as well as enjoy nude hiking and camping, and, of course, am always nude at home (unless I have the rare guest). The last few organized events I've gone to were an immersive theatre show in November 2019, and in-person yoga classes have started back up again. I'm now fully vaccinated and have gone to Tuscany Manor resort, been on a hike, and been to Black's. As for the subject of nudity and sex, I live my life with both. I do not believe nudism has to necessarily have anything to do with sex. But I also do not believe it never has anything to with it. There's a middle ground. I believe in consent, boundaries, and defining and expressing one's desires within those concepts of consent and boundaries.

I like to travel - been to London, Rome, Venice, Cannes, Sydney, Melbourne, Cairns, Auckland, Zipolite, U.S. Virgin Islands, British Virgin Islands, Tijuana, Toronto, and all over the U.S. Looking forward to Paris, Vancouver, Greece, Germany, Japan, and Scotland, among others, some day. Also would love to tour the U.S. and Europe via motorcycle.

Occupation
To become my best self

If it's for romance, I'm interested only in women. Otherwise, all friends are welcome.

Lawrence of Arabia, Apocalypse Now, The Godfather I & II, To Kill a Mockingbird, Raiders of the Lost Ark, One Flew Over the Cuckoo's Nest, Casino Royale, The Sting, Chinatown, The Bridge on the River Kwai, many, many, many others.

I'm not big on hero-worshipping. Regardless of how "good" someone is, humans are fallible, and the word hero is tossed around too easily these days. Having said that, the biggest heroes to me are the ones who give of themselves in our toughest (and most underpaid!) jobs - firefighters, police officers, military, nurses, teachers. "Thank you" to them.