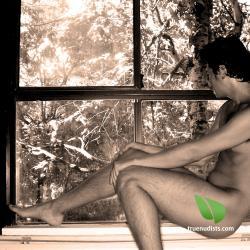 Hi, my name is Francis, I'm straight, cultured and sometimes too honest for my own good, but always truthful.

I'm a male nudist, who is attracted to females, but it doesn't mean we can't put the mating ritual to the side and converse as friends, I'm more likely to let the stars align by themselves than to ask you 'what your sign is', I'm aloof like that.. But I have to say this because gay males hit on me frequently, no I'm not a phobe, I'm simply straight, no hidden meaning or agenda here, just an FYI.

I do have the ability to talk to married woman without hitting on them, I mean, who made it okay to imagine that all single men want to disrupt a family unit, or that all single men want to shag the woman they are sharing a conversation with, c'mon, let's just be adults here, I won't shag you, and you won't shag me, why? Because reality, that's why.

And lastly, I just want to say, being single has afforded me a lot of time to observe society in hopes of truly understanding it and what I've noticed is that people project parts of themselves without knowing and it tells others, who are keen, a lot about them and I've noticed people are often guilty of the 'social faux pas' they accuse a person of, so if you falsely label me something, it was 'nice' knowing you... LITERALLY! But really, get a life.

People who are wise, grounded with common sense.