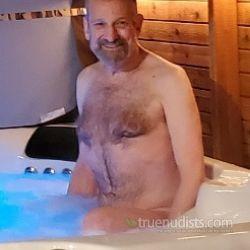 Classically trained musician and and bi male here--more gay than straight--looking for like-minded friends. While I've had a profile here for almost a decade, I just recently became a paying member so that I can actually communicate with other members. Most of my public nudity, save a few interesting bars in Amsterdam, has been at Black's Beach in San Diego where my husband (asullivan here) and I have spent 1-2 weeks every August for most of the last 20 years. However, I seem to be on a new adventure since the spring of 2021 in exploring nudism, and I now spend most of my time at home in the nude. We also recently joined the Rocky Mountain Naturist Club, the Colorado Buff Boys, and Mountain Air Ranch, a nearby nudist resort. It has been great fun meeting other nudists, making new friends, and spending naked time regularly with others.

I am also a radical intactivist who hates the fact that my penis was mutilated at birth. Thus, I am very active in various intactivist groups (Intact America, Genital Autonomy America, Your Whole Baby, Colorado ABC [Advocates for Body Integrity and Children's Rights]), seeking to educate American doctors and parents about the physical and psychological harms of neonatal circumcision which is nothing more than genital mutilation and nothing less than sexual assault!

Other interesting and enlightened people. Open to having lots of TN friends, but I'm unlikely to respond positively to a friend request that isn't accompanied by at least a brief note of introduction.