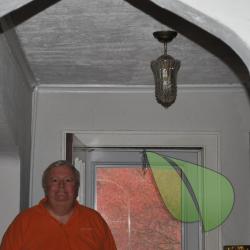 Single guy living in Monmouth County, New Jersey. I live close to Gunnison Beach, New York City, and Philadelphia and go there every once in awhile for a days outing. I like outdoor activities during cool and warm whether. Don't appreciate very cold or hot. When it is warm/hot I enjoy going to Gunnison or other beaches to cool off in the water. There are times when I like to invite a few guys over for naked visits; let me know if you like that idea as it's kind of boring around here during the colder months. Don't get me wrong, I am interested in this any time of the year.

I took early retirement in 2011. During the winter of the first two years I painted the interior of the house. During the third year I was bored during the winter so I took on a part time job. It got me out of the house and I'll never complain about any extra money. In 2017 I spent 23 days in Italy; most of it with a friend in Rome.

I keep busy around the house, I never seem to find myself with some other project that I want to do. Enjoying my time at Gunnison Beach, dinner with friends, reading, watching TV and time with my family.

I am happy to say hello to just about anyone. It's the starting place for new friendships. I am open to making closer friends if the chemistry is right. I sometimes go overboard in asking questions for the purpose of really wanting to know the person. Feel free to say something like I don't want to share that information. I would really like to make close friends throughout the world and would like to opportunity of coming for short visits to explore their part of the world. Obliviously I am willing to do the same. As mentioned, I live close to the beach, NYC and Philadelphia. I like taking people to different places and showing them around. I have to limit the amount of time doing this due to other obligations. Likewise, I want the person to feel comfortable in knowing me, so feel free to ask a lot of questions.

Different cultures, people, going to the beach, parks, woods, or mountains. Antique car shows, some museums, Washington DC, Paris, and other cities where you find people enjoying themselves. Computers and computer networks, history, and people who made positive changes in the world, such as Lincoln, King, and Wilburforce. A cold beer or nice glass of wine, and good conversation.

Like drama series such as the Closer, Law and Order. Like movies where the setting is during WW2 (not the battle, but the effect on life) such as Tea with Mussolini (outstanding cast) and Casablanca. Heros of the holocaust, The Hiding Place, Schindler's List. Also, the book Things People Couldn't Say by Diet Eman. Recently I watched Beverly Hills Cop. I love the scene when Eddie Murphy is giving a message to the host at the private club. His eyes, pose and voice are excellent!

Oldies to me is the Motown music, like other good songs from the 60 - 90s. Harry Chapin, Eric Clapton, Elvis Presley, Beatles. Also, like gospel music, and jazz when in the right mood.

JesusMom and DadGeorge Washington, Abraham Lincoln, Franklin Roosevelt, and Ronald ReaganJackie Robinson, Martin Luther King and Rosa Parks were all successful in fighting the problem of racial segregation by standing their ground and turning their cheek. More work is needed to form that perfect union.