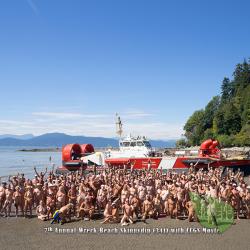 The Wreck Beach Preservation Society (WBPS) began January 25, 1977, with the assault on Wreck Beach by authorities without public input. This assault by bulldozers and massive dredges, catapulted the beach to fame when beach users formed a small group called Citizens Concerned for Coward's...

Hey guys! Newer nudist coming to Vancouver in August. Thinking of hitting up Wreck for an afternoon. Anyone care to chat and let me know what part is best? How to get there and such? Mail is open!

Looking for some laid back friends to hit up wreck beach. Im new to this community so any tips would be amazing! Hit me up if your interested in meeting up!

I live on the opal fields near Lighting Ridge Australia I am on Couchsurfing. If you would like to have a very different experience I am open to couples and women. Sorry no single guys Cheers. Tony

Hi everyone! I was on the AANR site two weeks ago and saw there was an event going on at Wreck Beach: Skinnydip Day 2018. Apparently about 4pm on Sunday the 22nd, there will be a giant group photo taken. There is a registration required, which is...

l just found out that Wreck Beach day this year is Saturday July 1st and it will be also Canada's 150th Birthday. It was a blast last year when it was held it was held in August. This year will be a real crazy party on the naked beach and we...

Hey Guys anyone want to hang out at wreck this summer? Let me know, i like to chill, smoke weed, listen to the music, and hang out nude at the beach. Neil

Over the years this ad hoc group of citizens have fought numerous attempts by conservative University of British Columbia (UBC) administrations to pave, bury, or destroy the beach and cliffs under the guise of erosion control. Although the Greater Vancouver Regional District (GVRD) took over stewardship from the Vancouver Board of Parks and Recreation in 1989, UBC began lobbying and is still trying to pressure the GVRD to be a good neighbor and protect UBC buildings too near the cliffs' edge through massive erosion-control works.

It appears 1998 will be the year these works or strategies for initiating and implementing these works--with public input--will mark the beginning of combined efforts. A massive slide on September 25, 1997 behind the Cecil Green Mansion Coach House, a heritage UBC building, has accelerated the emergency work which will be necessary behind the building. The WBPS believes the building should be moved, and perhaps bioengineering done just immediately below the site until a comprehensive plan involving Wreck Beach users can be proposed between Northwest Marine drive cliffs and those at the Trail 4 section of Wreck Beach. Authorities would have the public believe that Wreck Beach is only that beach at the base of Trail 6, but the WBPS has--for years--adamantly stated our mandate which is: To preserve the Wreck Beach area, including foreshore and cliffs, in as nearly a natural state as possible from Spanish Banks West to the Musqueam Reserve!