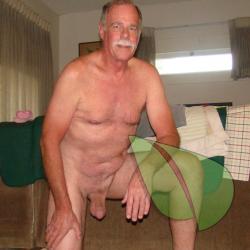 We live in Orange, Cal-a-for-nee and belong to the Glen Eden club. Sometimes, head down to San Onofre for a nude beach day. Trying to get our publishing business successful, but have faith we'll overcome. Yes, married and wifey loves being nekkid, but can't be shown because of her high profile in our business. We both love being shaved and are always flashing each other everywhere if we have to be clothed for some reason. Then again if you're nudists...is it really &amp;amp;quot;flashing???&amp;amp;quot; Sorry guys. I'm not &amp;amp;quot;bi&amp;amp;quot; and have never an interest. That goes for swinging, too. I never some female admiration, but all my action is reserved for wifey.

We're definitely not swingers and very, very hetero. I stopped smoking 24 years ago, so neither of us do that and we enjoy as few drinks when we're out camping and don't have to drive anywhere. Also fans of Las Vegas and like to fly there once a year if the finances allow. Politically, I guess I'm a &amp;amp;quot;liberal.&amp;amp;quot; You know...&amp;amp;quot;those people.&amp;amp;quot; Probably best we keep all of our politics to ourselves. For you guys who like &amp;amp;quot;older men,&amp;amp;quot; I'm really not into that myself.

Hey, you can also catch me on Flickr as &amp;amp;quot;audiobiker&amp;amp;quot;where I've posted pretty much the same pics as here. Shoot, feel free to ask my anything. I don't get offended and I'll answer whatever you like...LOL! Although, I do go on cam, I don't private cam with you men. C'mon guys, give it a rest. Now I know how women feel. Well, almost!

Occupation
Technician in a church.