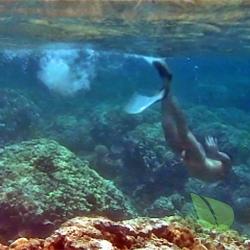 I embraced the nudist-lifestyle as a teenager. I surfed and skin dived nude with my high school buddies at Pirate's Cove in Palos Verdes (Los Angeles). We spent every day of the summer surfing and playing Frisbie on the warm sand. It was exciting to be free of my suit and watching the other people enjoying their own freedom. Also, we went to Palm Springs and hiked nude in the desert and visited the secluded-canyon hot-springs. Sometimes people would invite us to swim in their backyard pool where we sometimes enjoyed a friendly soak in the spa. In our Southern California neighborhood, most homes had a backyard swimming pool. On a warm night, we would dare each other to jump the backyard fence nude and swim across the neighbor's swimming pool. If we didn't chicken out, we jumped the next fence and continued swimming nude until we reached the end of the block; about ten houses down to the corner! We had so many backyard dogs barking excitedly we had to run nude in the street to get back to John's house! When my friends Brian, John, and I turned eighteen we drove Brian's Chevy Blazer down to Baja, Mexico on a surfing safari. That was before the road was paved to Cabo San Lucas. The second week we ended up camping on an awesome white-sand beach in Concepcion Bay. We were the only people on the beach for miles and miles. The weather was hot and we were dripping with sweat, so we stripped and spent the day swimming and surfing nude behind our car-top boat. The next day, because there were no other people to be seen anywhere, we never bothered to put on our swim suits. We were becoming very comfortable being nude with each other and enjoying our natural surroundings, so that afternoon we hiked nude a few miles down the white-sand beach exploring the other coves for a good diving spot. By late afternoon we walked back toward camp and before we reached our small cove, an old black-and-white police pick-up truck pulled up to our tent! We waited for what seemed like an hour and then decided that the officer wasn't leaving so we walked into camp butt naked. There wasn't a stitch of clothing between the three of us, not even shoes! The cop turned on his red lights when he saw us and then jumped out of his truck and rapidly spoke Spanish, telling us that hippie nudists are against law in Mexico! We thought we were busted big time. Three teenage surfers being thrown nude into a Mexican jail wasn't going to fun,.....for us! The cop wouldn't let us go in the tent to get our suits. He ordered us to stand nude next to his truck while he decided what he was going to do with us. Luckily Brian spoke fluent Spanish and after fifteen-minutes of friendly negotiation and exchanging information about our families and surfing spots where we had camped earlier, Brian smiled and told us that we would have to pay a dollar for camping and a five dollars fine for being naked!To make a long story shorter. Each day our all-over tans deepened and Brian and John's blonde hair turned golden like corn silk; not like anything you can buy from a bottle. We spent three weeks fishing, diving, surfing, and hiking nude in the Baja desert, and every afternoon Police Chief Hector stopped to collect a dollar for camping and five for being nude! That whole time that we were there, the only other people we met on the beach were a young twenty-something couple who were on their honeymoon. They spent a few days camping in our cove and it did't take much for us to talk the honeymooners out of their swim suits! Carolyn loved the attention that she got from the four naked guys. Every afternoon Chief Hector greeted us with a big abrazo (hug) and slap on the backside when he stopped to collect our fines. We shared our daily catch of fish and clams with the Chief and he brought us cold beer and some terrific Mexican food that his wife cooked each afternoon, for a fee naturally. We loved being naked so much, we drove Brian's Chevy Blazer back up the Baja nude, 650 miles! However, we put our shorts on whenever we stopped for gas or food. As soon as the small ranchos disappeared in the rearview mirror, off came our shorts!Twice a year, for years afterward, we camped on that same beach until it got too populated with up-tight people who didn't care for hippie nudists. We remained friends with Chief Hector for years until he retired and moved to La Paz with his family. After that first nude surf-trip to Baja with Brian and John, we have been life-long nudists and friends.