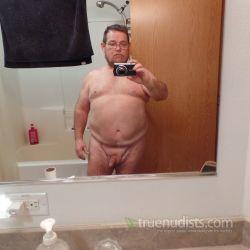 Straight shooter in all aspects of life, No BS allowed !!! I am married, but the big M set in for her 8 years ago. So she has no interest in sex or even a site like this. Been naked in the back yard for about 30 years, well half of that if you figure in MN winters ;-) Time and money seem to work against each other for social nudity, never enough of either :-(

I/We are NOT interested in swingers, or gay activities!!! Sorry them door's slammed shut long ago.

UPDATE; OK I see I need to say it. NO offers of sex PERIOD. My respect for God and a healthy fear of STD's means my wife is my one and only, and I intend to keep it that way.

I am fairly private, some have said ant-social. So friend requests will be handled as few and far between, as I have taken a look at a bunch of profiles. Those that appear to be friend collectors, and private forget it. Those who are very active here stand a better chance, as I have been able to look at the article you responded to and am able to better judge who you are personality wise.

The usual privacy policy will apply here. This my info and I give NO consent for it to be used in any form, by anybody.

Star Trek (NOT the JJ crap) and other Sy-fi, and action movies.

Just about anything BUT rap!! Often just peace and quit.