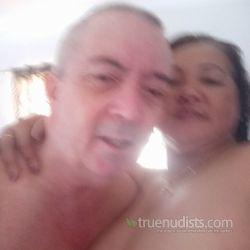 We live in the Philippines and are very happily married since June 2017. Husband expatriate Australian from Newcastle, New South Wales, with nudist experience whenever possible from teens on, including nude beaches and resorts, as well as home nudism. Wife only very occasionally nude at home and while tolerant of nudism finds it hard to go the whole way. We both have adult children from our previous marriages, and were both widowed when we met. None of either of our families are nudists. We are not swingers and are not interested in any chat about sexual behavior, however we do not regard nudism as non-sexual either. Humans are sexual beings. In the spirit of true nudism, all photos displayed on our media are now fully nude. This should be a requirement for all photos displayed on profiles on this site. True nudists should not be afraid to show themselves fully nude. Both of us also have removed our pubic hair since our teens for reasons of hygiene and aesthetics, but we also understand those who like to remain hairy! Wife has recently agreed to go nude at home when her business is closed on Saturdays, and to be nude in bed. Her previous experience of going nude was swimming nude in the river with the local children when she was young.

Singles and couples for the purpose of online chat, especially about nudism but other topics are OK too. We are friendly and accept all body shapes and sizes and all sexual orientations.

Too many to specify but includes everything from singers like Tom Jones and Kenny Rogers, and bands like The Moody Blues and The Eagles through to rock and pop from recent years like Bastille, Bruno Mars, John Legend and Ed Sheeran. As well we love pop music from the Philippines in the local languages of Tagalog, Bisaya (Cebuano) and Ilonggo.

Anyone who cares for the poor and unfortunate. Anyone who will stand up again after they fall.