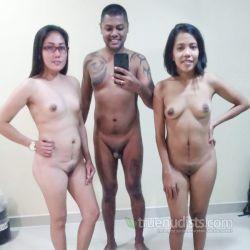 First of all, Photoshooting is our main hobby and we take lots of photos, those of you are unpaid members in TN and cannot see our photos/videos, visit our blog here, and keep an eye on both 'posts' and 'page' in our blog, we're regularly uploading our contents here:

We are Nikie and Clarissa, a very happily married naturist couple and we have 2 kids. I'm using the word "We" because both ME and my WIFE are using this TN account as a CERTIFIED COUPLE SINCE 2010 AND ALSO WE ARE PAID LIFETIME TN MEMBER .. Me and my wife are both longtime nudist (since 2010), member of Naturist Association Thailand, been to Oriental Village Naturist Resort in Chiang Mai, Chan Naturist Resort in Pattaya and experienced Social Nudism with fellow genuine nudists .. We are NOT SWINGER and NOT interested in swinger or perverts.

ALL OUR PHOTOS ARE TAKEN BY US AND ALL RIGHTS ARE RESERVED, YOU HAVE NO PERMISSION FROM US OR RIGHTS TO DOWNLOAD OR POST OUR PHOTOS ELSEWHERE.

Occupation
None of your business

First of all WE ARE NOT SWINGER SO IF YOU'RE A PERVERT OR SWINGER STAY AWAY FROM US . . We don't tolerate nasty or disrespectful comments from anyone, so if you are already our friend and found yourself removed or blocked, it's because we didn't like your comment/s, we are not fan of comments at all .. Here's our blog: .. clarissanikita.blogspot.com .. We're on YouTube too: ... https://youtube.com/channel/UCdbMzOPJmhCLCiKQulAGdng

PHOTOSHOOTING is our main hobby and we take all sorts of photos from our daily life. Both me and my Wife are certified sharpshooter and we love firing / target practice. We are licensed security officer.

Ukrainian President VOLODYMYR ZELENSKYY. His leadership, patriotism and bravery is second to none in our 21st century. He's one of a kind! God bless upon him! The bravery, determination, sacrifices and patriotism of President Zelenskyy and his Ukrainian Armed Force continue to impress us all, and majority of the Ukrainian citizens supporting him for this .. In February of 2022 filthy terrorist leader POOTIN and his invading Russian troops attacked Ukraine on 3 fronts, captured Chernobyl, Hostomel, Bucha, Kharkiv, Kherson and Zaporozhye in a blitzcraig type attack and came too close to the capital city KYIV with a 67 kilometers long Russian Army Armoured-Artillery convoy. . At that moment I thought KYIV will fall, but my Wife said me that KYIV will never be captured while the Ukrainian President ZELENSKYY is alive. KYIV will fight till the end and it will become a staunch defence to penetrate for the Russian invading force. She's right! Not only Zelenskyy and his force successfully defended the capital KYIV, they delivered Russian invaders a humiliating defeat, leaving 67 kilometers of Armoured convoy in a total ruin! This is a slap on filthy terrorist POOTIN'S face! .. After that Zelenskyy and his Ukrainian Force started Counter-Offensive operation against the invaders and gradually they liberated Chernobyl, Hostomel, Bucha, Kharkiv and now Kherson as well. We SALUTE President Zelenskyy for his patriotism and strong leadership! . . On the other hand, I never really liked POOTIN, but during the first phase of war, I used to have sympathy for Russians. It's because during my service as a mariner (I used to be in Navy and then switched to Marine profession) I've been to 27 countries including Russia and Ukraine both, as a junior Engineer Officer I served with many Russian Officers and Crews on board the ships, so I always had a soft corner for Russians. I've been to Kaliningrad, the westernmost city of Russia and also I went to Vladivostok, the easternmost city of Russia; something many original Russian Citizens cannot experience themselves in their ENTIRE LIFETIME!! People working in maritime sectors and with map knowledge will understand this, it took straight 26 days by our ship to reach Vladivostok from Kaliningrad to travel this vast country Russia .. But in March 2022 when Russian Invaders started artillery shelling and air bombing on civilians in Mariupol, Donetsk and Luhansk, killing men women and children, my wife switched side and withdrew her support for Russia, still I thought everything will be okay and peaceful solution can come out from negotiation between Zelenskyy and Putin. BUT after the Ukrainian Armed Force liberated Hostomel-Bucha and mass graves of slaughtered civilians were being uncovered, I decided NOT to support this filthy terrorist Russian Regime anymore. Same thing we saw when Ukrainian Force liberated Kharkiv in September and found multiple mass graves in Izyum including slaughtered men (hands tied behind their back), women and children as young as 7 years old! My Wife told me that RUSSIA IS A FILTHY TERRORIST STATE, POOTIN IS A TERRORIST LEADER, POOTIN AND HIS INVADING FORCE MUST BE ELIMINATED. I agree with my Wife! . . You ask who are our heroes? EACH AND EVERY MEN AND WOMEN OF UKRAINIAN ARMED FORCE are our heroes, they're fighting against world's second largest Armed Force the Russian Military, yet unbroken, because of their unbelievable courage and desire to fight for the freedom of their motherland! Here to mention, we SALUTE and fully support American President SIR JOE BIDEN for supporting Ukrainian Armed Force in such a crucial time! By providing Military and Humanitarian Aids for Ukraine, President Sir Joe Biden has earned our love and respect! Biden is doing the right thing by supporting Ukrainian President Zelenskyy, Ukrainian Armed Force and Ukrainian Citizens in this war .. NO TRUMP/MAGA PLEASE !! .. SLAVA UKRAINI!