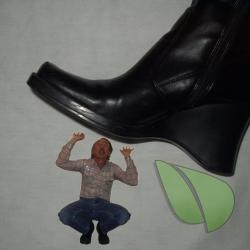 Widowed just a couple years ago.
Bounce between Akron, D.C. and Eastern West Virginia regularly.
Home is Akron, but I have a place in Virginia, too, so I could be at either one.
Director at Avalon clothing optional "resort" in WVa.
More stuff I'll happily tell in person, but not in an on-line profile.

This *is* a nudist site, so how and why I became a nudist is appropriate.

Truth be told, I didn't become a nudist ! I was born nude, and just never
really stopped, except for a few years here and there.
Oh, yes, during the strict Catholic upbringing, after about age 5 or so
( best as I can remember ) my parents stopped putting me in to bath with
my sister, dressed us in pajamas, and for a few years I was clothed.

For the most part, google the lyrics to "When country wasn't cool" by Barbara
Mandrell, then substitute "nude" for "country" and you've pretty much got it.
( leave in country, and it still pretty much describes me )
Somewhere around puberty, I once again remembered how it felt, so whenever
there was opportunity, off came the clothing. If the family went somewhere
( as we probably all remember ) they were hardly past the driveway and I was being me.

Later, on my own, it was simply a matter of appropriate practicality.
Why on earth grab a bath robe to go from bed to shower ? *especially* when
you live alone ? If there's no reason to be clothed as the day progresses,
then why waste the laundry ?

Today, it's still much the same. To venture into the textiled world, I feel
that I must dress. At night, to sit out on the deck when no one can really
see or be offended without trying, who cares either way ?

When I married, she had a different background. To go from bedroom to shower
and back naked was no big deal, but when the kids came, things changed again.

When the marriage broke up ( and I thank God it did ) things reverted
to as it is now. Dress for fitting in, in a clothed world, where nakedness
is taboo. When in Rome......

My most recent relationship, some 9 years, was one of practicality.
Dress where appropriate.
Once dressed, just don't expend the effort to undress until bedtime.
Being somewhat frugal, stay dressed in winter. Keep the heat bill down.
Lately, I'm not even doing that.

Today, and for the last couple years I'm again alone more often than not.
Of practicality, dress to shop, dress to get the mail, etc. but otherwise why bother ?
What *is* new, is internet, and this site. Yes, I was seeking dating sites that
cater to folks of like interests, and stumbled across this one. Wahoo ! ( some years ago )
To meet someone through a site like this, I know we have at least one interest in common.
What a surprise to discover that there are resorts, places where folks congregate
to do and be what I've always been, but "private" because I simply didn't know !
( or didn't know where ) A whole new world beckoned, and I am grateful for it.

The last 5 years or so, more or less, I've been hanging at Avalon, mostly.
Love the people, like the place, ran for a Board seat, and have been a Director
ever since. Find me there most weekends I'm in that part of the world.
I have offices in Ohio, and Arlington Va. as well as homes in Akron and Gainesville.
( thinking a bit about retiring lately, though )
Avalon is convenient, on the way, and a really great place !

There's much, much more "about me" and other things. Racing, radio, hacking code,
and much more that's not particularly germain to the purpose of *this* site, but
ask me, and I'll likely tell all. As you can already see, I can be somewhat prolific
with words. :)

A good woman ! Ultimately, we are not meant to be alone.I am, and I'd like to cure that, but I'm not desperate.I'm quite OK alone, and getting more and more used to it every day.Still, marriage exists for a reason. Likely I'll never marry again, butI'm certainly open to ( and hoping for ) the right woman coming along.While most of my friends are male, I still enjoy the company of woman.

Well, I'm a full grown, straight, normal, adult single male.Looking at women DOES interest me, and I enjoy clothed as much or more than unclothed. There ! I admit it. I am who and what I am. Voyeur ? Perhaps, but I think not. Photos of men, only so far as to see who's at the other end of the communication. Just show me a face. I've not listed as bi, or curious, or any of that because I'm not. Just not interested.Exhibitionist ? Perhaps, but perhaps not. I don't particularly care who sees me, naked or clothed.I've posted a few pictures of me. All staged, as there are VERY few pictures ofme in any context in existence, clothed or unclothed. ( though no one seems to know quite why ) This being a nudist site, there's a mix.If we're talking about camping, motorcycles, race cars, boats, hiking, travel,ocean cruises, and thelike, then the above may, or may not apply.Best just ask. I've been rambling a bit so far....

Well, when you work in the business it all runs together eventually.Almost anything ( including Gregorian chants, Cajun, and Bossa Nova ) except rap.Rap isn't music. It *is* an art form, but music it's not.

Anyone able to sustain a 30+ year marriage and not kill each other !