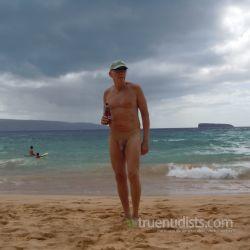 Been practicing naturism on and off for more than 30 years and have convinced the wife of the benefits. I began skinny dipping around age 11 and the boys swam naked in swimming class in 7th grade ( age 12). In hindsight, it was a good introduction to public nudity. Before Irma, we vacationed yearly in St. Martin and would spend many days at the beach along Club O (it's the closest thing to paradise). We have met lots of great folks there that are also nudists. We look for new nudist places to visit during trips we take. These have taken us to Hippie Hallow, Little Beach, Haulover to name a few. We have also stayed at Cypress Cove several times and have always enjoyed our stays there and have made new friends there. We made more new friends on the 2019 Bare Necessities cruise. We returned to St. Martin in February 2020, stayed in Orient Village and visited the former Club O beach daily. It was wonderful to return despite the ruins of the former Club O looming behind us. I have learned that it is far easier to make friends with nudists than to make nudists of your friends. I also have learned that most look down on this activity, so we generally don't discuss this aspect of our lives with our textile friends. I registered on this site by myself because I know the wife would never agree to the certification process, despite the claim that the nude photos would be destroyed. She also isn't into the social media thing, not on Facebook, etc.

Other couples who enjoy naturist vacations and can provide suggestions for other places to try out.

I have very little time for movies.