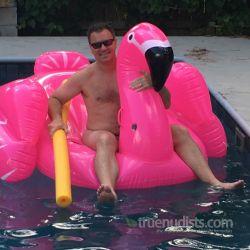 I am married and looking for friends. I really enjoy going to the beach and used to live near Haulover Beach in Miami. I like cultural events, museums, parks, zoos, learning about new things, and just absorbing my environment. I participate in an annual nude camping trip at White Tail Park with a bunch of friends which is one of the best times of the year!

It's cool to send me a friend request BUT please have at least a profile pic, a profile, and consider messaging me first so I know who the heck you are. I've enjoyed communicating with people here and am not interested in just collecting people on my friend list.

I'd like to meet people who are similar to me in the sense that they are laid-back, educated, drama-free, easy going, and interested in the world around them. I like people who are mature enough to take responsibility for their lives and their decisions. I also like people who can prod me to have new experiences (except sky diving or bungee jumping). If you are creepy or try to be nasty don't bother as I will just ignore you. :-) It would be great to meet other male couples but we're open to just about anyone.

See above. I have a lot of interests but not enough money or time to do them all.

Marvel Studios fan, The Godfather, The Color Purple, Star Wars, Disney animated, I also like a lot of others and can't even begin to list them all. I am in love with my Netflix and have a steady rotation of films there. I am also a big documentary fan.

Over 5,000 songs on my iTunes in every possible genre. I like it all from classical to hip-hop to club music to latin to showtunes to whatever. I don't like everything of course but I am very open minded. Was in band and chorus for over a decade when I was young and still retain that musical drive inside me.

Ghandi, Buddha, people who do right no matter what.