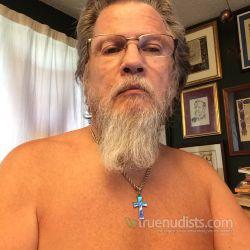 Im really new to public social nudity. For many years I would not even have considered a publicly nude anything. One of the barriers was accepting that nude and naked are not the same thing and the first step toward public nudity was to recognize that nude was both my choice and empowering..
Over the last few years I have been really working on a weight loss program and have now lost (and kept off) over 120 pounds. The weight loss journey continues and I will be updating profile pictures as I continue the process. It is quite possible that those pictures will show more of me as there is less of me to photograph. If I am being honest with myself it is quite likely that I would never have been nude in public without the weight loss. I grew up being body shamed and it has taken a long time to get my head wrapped around the fact that being nude was for me and being nude in public was not the exception to that rule. There are still times where past body shaming comes to mind but I am getting better at changing the tape.
My first public nude event was in September of 2020 and without the encouragement of one of my best friends it would not have happened. I had been discussing public nudity with him for about 4 years and decided to invite myself to his nude beach afternoon. It turned out our local Nude Recreation group had an event planned (Naked Hike and Beach Day) for the same time and same place so I ended up going out to the beach with them and when it came time to strip down I did...and my friend wasnt even there yet. It was strange, it was exhilarating and I was hooked. Met some good folks at the beach; Ive been back to the beach several times and it has been a very freeing addition to my in home nudity.
I have been doing at home nudity for 30 years at least and have slept nude for even longer. There were some minor nude events as a teenager such as skinny dipping in the moonlight but there were only a couple of those.
I am looking to explore nudity with like minded people who have no interest in judging me and will let me learn who I am. I continue to be a little skittish about attention because it has taken many years of intense work to reclaim my body as something I own for myself. I will most likely bolt at the first sign of sexual interest and, because my childhood abusers were men, anything I interpret as sexual in nature from men is liable to send me far away. This is a risky thing for me and I am hoping that I can become more comfortable all the time with the public part of nudity, there is healing happening but I want it faster. It is only 50 years since my abuse stopped and only 2 months since I have felt safe enough to be nude in public.
If you send a friend request then please message me and tell me a little bit about yourself; to start Im being a little cautious on expanding the circle here. I will check your profile, your location, your media files, your friends list, your groups and your certified status, I do not regard this as paranoia; with my history I am being very careful.

Anyone who is interested in casual, non sexualized nudity who is not scared off by newbie questions.

I love to read and almost always have a book with me. Since I have medical issues around vision I may be listening to an audio book so dont be afraid to speak a little louder if I dont respond to you. I also belong to a medieval recreation group, the Society for Creative Anachronism. I design and make simple jewellery, weave decorative bands, am learning to make wine and mead, and research both the time period and the culture of the SCA persons I have developed.

I tend not to be a hero kind of guy but definitely respect and admire survivors of childhood sexual abuse; the fact that you survived speaks well of your determination and strength.