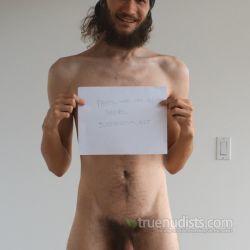 Im also on JustNudism.net under same name but with underscores. Its like TN but no fake accounts, close moderation, and a much more modern design with phone apps!
==============

Iv been a nudist in my day-to-day life at home and outside in nature since my teenage years. At the time I had never heard the word nudism and the concept of it being a lifestyle or ideology didnt exist to me, it is just how I was because I liked it and never saw any shame or wrongdoing in being such.

Nudity was not acceptable with parents or social circles. Until happening on TN one day look for human figure photos to draw for art classes, I didnt even know there was such a thing as social nudity. Today many people who know me also know I'm a nudist. But I do not make it a point to ensure people know. Having recently moved to a small island right next to Vancouver Im hoping to discover new freinds/nudists here. We have a lot of mountain forest and rocky shores here to explore for a private area. Unfortunatly no one else on TN lists Bowen as their location. If you cross the very short and inexpensive ferry ride to the mainland there are mountain trails long enough for multi day hikes right next to the dock so hope to do some overnight nude backpacking come next spring.

I love being out on a nice day such as a nude beach, hiking trail. or exploring abandoned and forgotten locations like ghost towns, mines, factories, large ships, etc. Would love to visit Hashima Island (Japan), The Paris Catacombs, Pripyat (Ukraine), pretty much any large Nazi installation (There are a number scattered through Europe), or other places that are radioactive or otherwise so much fun people are scared to go there.

I have zero tolerance for spam or sexual perversions, and a trigger happy flag and block finger to prove it.

People who are local / have the chance of meeting, or have cool interests.

I listen to a wide range from Metal, Jazz Fusion, 80's Electronica, all the way to Classical and Orchestra