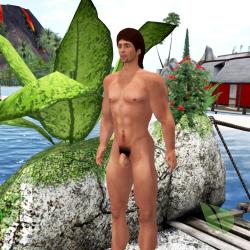 Leaving off the usual things kids do to get naked, when about 11 or 12, I would sometimes go out deep in the woods and when sure no one was around get naked. Early in my 20s, I was out in the woods of Eastern Oregon and got the idea to go hiking nude when with my wife. I must have been at least 1/2 mile from camp when I realized I had no clothing of any kind with me! Fortunately, no one was around and Oregon is a liberal state in regards to nudity. In college, I often made it to Blacks Beach in California. The last few years my nude activities were going to Collins Beach and Rooster Rock Park in Oregon. I have relocated and now live in Kentucky. My nude activities are now home and yard mostly. Perhaps next year I will be able to do naked gardening! We hope to sometime next summer to make our way to one of the resorts in a surrounding state.

Leaving off the usually mentioned famous people, I have met a few very famous. After talking with them awhile, they were just ordinary people regardless of the pretentious attitudes that fame can bring and some have exhibited. My conclusion is even the ordinary people often have every quality that you would think you were extra attracted to the famous people for. The flattery that comes with fame can ruin some people, but some seem better able than others to escape that unflattering effect of fame.

Read - Who I would like to meet - section. As a kid, anyone who played for the Milwaukee Braves! (B-13)